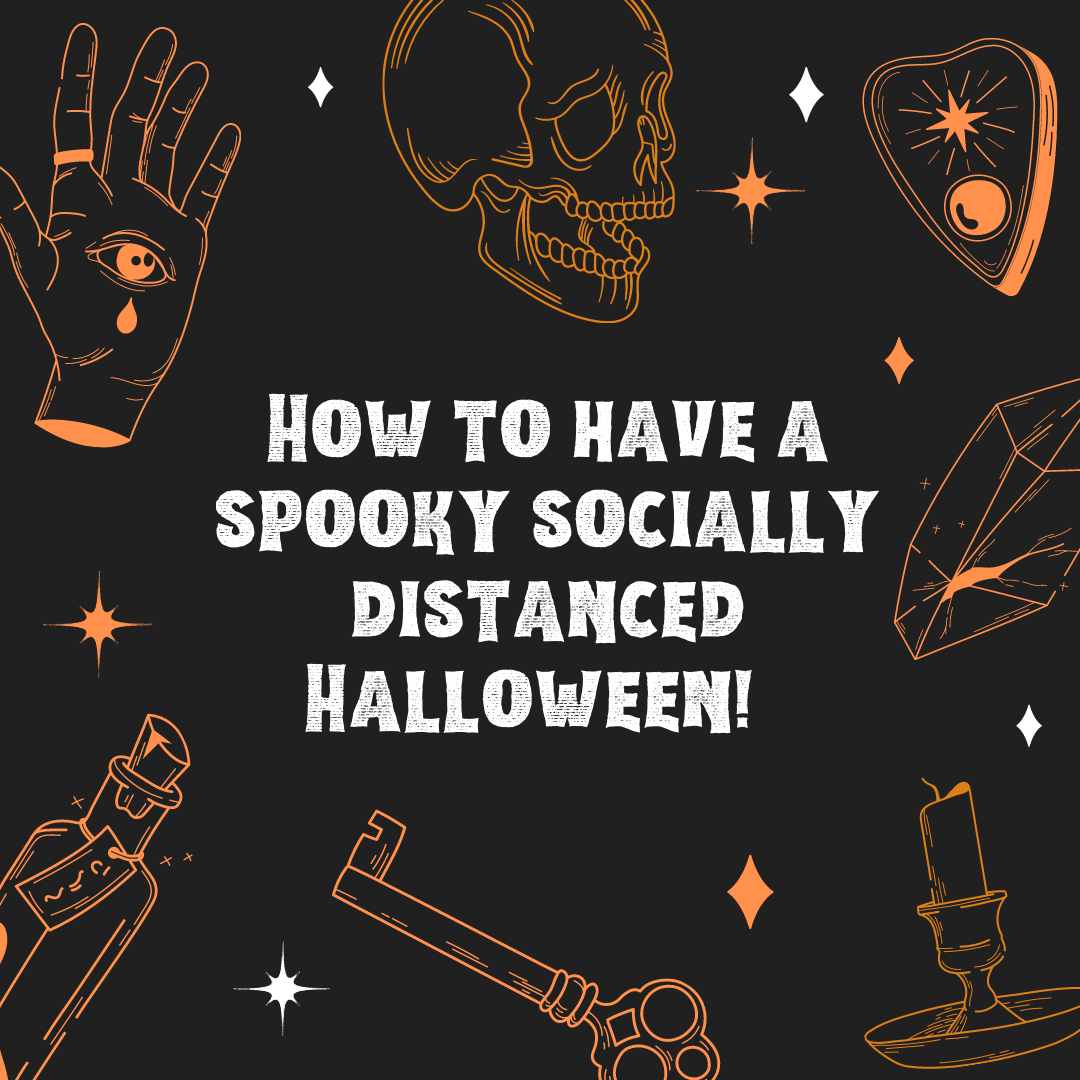 Lockdown isn’t going to stop us from celebrating the spookiest day of the year! We’ve gathered together a list of ideas to help make this Halloween just as creepy, but more socially distanced than last year!

Most of us have a favourite scary film! Get together with your mates over Teams, Zoom or Facebook and take it in turns to pick what you all watch! The great thing about this is if the film gets a bit too scary, you can just move away from the screen!

We’ve got a list of our top 5 spooky-esque films below for inspo!

We’re showing our age here a little, but this is definitely one of our top favourite Halloween films! If you haven’t watched it, we highly recommend it! It’s creepy and a bit goofy, with talking black cats and over the top witches, to us, it’s the epitome of Halloween!

A cult classic! The Blair Witch Project started the trend for ‘found footage’, this creepy film follows a group of film students who get lost in the woods while investigating the local “Blair Witch”.

A Tim Burton favourite and the Inso for many a Halloween Costume, this classic stylised horror film traces  a couple and their daughter who find themselves stuck haunting their home in the afterlife.

“I see dead people” is by far one of the most popular Halloween movie quotes to this day, and rightly so. In this paranormal drama, Haley Joel Osment plays a nine-year-old boy who, in fact, sees dead people. Need we say more?

This is Cat from KC Marketing’s all time Halloween favourite! The spooky aesthetic is something else, and it’s a complete feel-good film! It might not have the jumps and shocks of a traditional horror film, but it’s definitely a wholesome spooky watch!

Get pumpkin carving or painting!

It’s an old tradition, but a good one! Crack out the pumpkin carving kit and pop a picture up on social! If carving is a not your style, try painting a pumpkin! Check out below for some inspo!

Create or listen to a Halloween Playlist!

Music does really set the mood for Halloween, so why not try creating your own spooky playlist? Or, you could listen to one already made!

Decorate your room or a window!

Just because we can’t go out to celebrate Halloween doesn’t mean you can’t decorate! Spooky season is the perfect time to give your room or windows a bit of an autumnal flare! We love some of the ideas below!

Stories can scare the living bejesus out of us, just like films! Take a look at our top scariest books to devour over Halloween!

Of course you’ve heard of Dracula, but have you actually read the book? If not, it’s time to read the vampire novel that started it all. This book has inspired a whole host of films, books and styles over the years. Unlike some of the charming vampires we see in pop culture today, Dracula is much darker, taking you down an evil and twisted storyline. You’ll find no sparkles or soul here, and trust us when we say that the book is much better than the film!

You may have caught the film-adaptation on Netflix, but did you know it all began with a book? Malerman’s intense story of a world that slowly crumbles as people go murderously insane after seeing mysterious creatures—referred to simply as The Problem—is so scary because the reader only has the information that the characters have, and that’s not much. The world collapses and the survivors can only seal themselves off from the outside and try to avoid the worst, leading to a torturous wearing down of hope that leaves the reader defenseless against the horrible images Malerman conjures.

Several of King’s books could be on this list, but he frequently blunts the terror of his stories with the richness and humanity of his characterizations and the sprawl of his narratives. Pet Sematary manages to be his most terrifying novel by dint of its simple, devastating concept: a magical cemetery where buried things come back to a sort-of life—but aren’t quite what they once were. From that simple idea King ramps up to a climax that gets under your skin in a fundamental way most horror stories fail to.

Lord of The Flies - William Golding

You may have studied this one at school; but did you know it’s a horror classic?! Golding’s account of children stranded on an island without supplies or adult supervision is absolutely terrifying for one simple reason: there’s nothing supernatural going on. It’s a story about insufficiently socialized humans descending into savagery because that’s our fundamental nature. You look into the abyss at the center of this novel and the abyss looks back.

When you think about clichés in horror fiction, the haunted house is at the top of the list, an idea done so often it’s frequently an unintentional parody. Shirley Jackson, however, was no ordinary writer, and she takes the concept of the haunted house and perfects it. The scares come not just from the malevolent actions of a house that seems sentient and angry, but from the claustrophobia we experience from the novel’s unreliable narrator, Eleanor, whose descent into madness is slow and excruciating and only begins after we’ve been lulled into a false sense of security by the seeming relatability of her early persona.

A good old-fashioned ghost story is designed to terrify and entertain, and Straub’s breakthrough novel does both. Five old friends gather regularly to trade ghost stories, but when one of them dies mysteriously and the survivors begin to dream of their own deaths, a secret from their past is revealed—and the simple pleasures of a ghost story are explored to their most frightening ends by a master of the form.

Just because we can’t go out properly this year doesn’t mean we can’t get dressed up! We found a few amazing halloween make-up tutorials that will definitely give your at-home costume the edge!

Let us know if you give any of these ideas a whirl! Remember to stay safe though! We’re all still very much about social distancing, so keep it up guys!