Andy Edwards came to prominence as Robert Plant’s drummer between 1997 and 2001. During this time he worked exclusively for Robert, performing all over the world on over 100 gigs. These included performances headlining many of the major music festivals across Europe.
During this time Andy began his relationship with Tama drums that continues to this day and he has performed in many drum clinics as a demonstrator for Tama. In this capacity he has performed at all the major drum events in the UK. In 2005 he played at the UK’s biggest ever clinic and he has performed alongside Mike Portnoy, Greg Bisonette, Terry Bozzio, Thomas Lang and Jimmy Chamberlain Kenny Aronoff, Steve Smith, Gavin Harrison, Simon Phillips amongst many others.
More recently and has made waves in the progressive music scene contributing to many award winning albums and DVDs and he has featured in many of the ‘best prog rock’ polls for various publications. He has toured and recorded with prog rock legends IQ and was a founding member of the cult prog band Frost recording two widely acclaimed albums ‘Milliontown, and ‘Experiments in Mass Appeal’
Andy currently endorses Tama Drums and Hardware, UFiP Cymbals, Jobeky e-drums and 2box drum modules. More recently Andy has also been recording for prog band Magenta, releasing the album ‘The Twenty Seven Club’ and has worked with bassist Steve Lawson in a variety of improvised settings .
He currently plays alongside Bev Bevan (ELO, The Move) in the folk rock band Quill’ 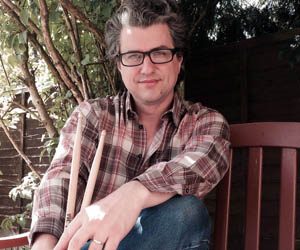