Kidderminster College welcomed Matt and Mike, the founders and directors of local media company, Stone’s Throw Media to the building on Thursday afternoon for a chat with 20 of our media learners about setting up a business, the daily demands of their roles and how they got to where they are now.

Matt and Mike met at University, where they found that they both had a talent and passion for making videos which led them to eventually start Stone’s Throw Media in 2011. Over the course of the next 7 years, they grafted hard and built their business to what it is now, recently winning the Micro Business of The Year Award 2018! Unlike most media agencies, Stone’s Throw have bucked the trend and chosen to remain in the Midlands, “…the South is saturated with Media Companies, we want to make an impact on the Midlands and bring media jobs back to the local area“. 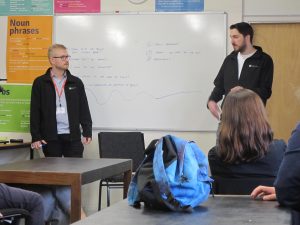 Jack Brown, Media Tutor completely agreed with Mike: “I think it’s really important that we have links to local companies for the progression of our learners. With the recent developments of the possibility of Channel 4 moving to Birmingham as well as Steven Knight’s proposed film studio, it is vital that learners see that they are able to stay in the region and work in an exciting and vital industry to our national and international economy.”

KEY PIECES OF ADVICE FROM THE GUYS AT STONE’S THROW MEDIA:

You can check out their work portfolio HERE,