James Chatfield is currently studying on the Kidderminster College BA (Hons) Creative Industries Top-Up degree, and was invited to discuss his career so far at a TEDx conference.

TED Conferences are a media organization that posts talks online for free distribution under the slogan “ideas worth spreading.” This talk was given at a TEDx event using the TED conference format but independently organized by a local community. TEDx brings the spirit of TED’s to local communities around the globe. TEDx events are organized by curious individuals who seek to discover ideas and spark conversations in their own community.

James’ talk was entitled ‘Just go, for you can go anywhere’ and he discussed his busking past within Kidderminster and the surround areas. He discussed how after working in retail he decided that music was the route for him, and how busking has taken him to many different places.

James describes himself as a multi-instrumentalist street performer who travels around with the mission to spread positivity to the streets, brighten someone’s day and connect to people. He described how magical busking feels, with adults and children smiling, interacting and dancing to his music on the street. His ultimate goal is to create a mobile studio to travel around the world and ‘drive anywhere he can’.

He said: “I was asked to do the Tedx talk in Dorbirn from the curator – Sarah Luger, after she searched the hashtag ‘busker’ into Facebook. She messaged me with interest in my playing style and wanted to hear about my busking story. Patience and persistence helped me get into this position. Public speaking has always been one of my biggest fears, so I was completely out of my comfort zone and in totally terror before walking on that stage in front of hundreds of people! I prepared a speech but waking on that stage, my brain froze and I completely forgot it, but everything I said seemed to naturally flow out. Before I got on stage Moritz Kempf (Moe) (who looked after me the entire Tedx weekend, taking me for a beer on the highest mountains around Dornbirn when I first arrived) held my shoulders and said “you’re a mountain!” – this helped incredible amounts!

After doing the talk in Dornbirn, I got a standing ovation and during the after party, everyone gathered around my CDs, waiting to speak with me and grab a CD! I had people come up to me hugging, ‘thank you, your words brought tears and you’ve inspired me!’ someone said, more people hugged me saying thank you, this happened for about an hour, I played a little show in the garden which was the most intimate and fun gig I’ve played! Then we all got drunk and danced like fools! And since the release of the video all my friends have been calling me saying how proud they are of me, I’ve had people from all over the world message me saying how much it inspired them and how they loved what I said and played! Its been crazy, I’m extremely grateful to have had the chance to talk to so many people on such a big platform – Tedx! I’m extremely grateful for everyone’s love towards it and I hope to bring more positivity to them!”

Andy Edwards, Lecturer at Kidderminster College said: “I was immensely proud to see James giving his TEDx talk after working with him for 6 years while he studied on the HND Music Performance and Level 3 Music Technology courses at Kidderminster College. He is now studying on our new BA (Hons) Creative Industries degree and continues to wow us.”

He added: “His journey into busking started during the Song of Sirens project which was launched as part of the Kidderminster Arts Festival, with our learners busking across the town. James really excelled with this project and also adapted and completely changes his direction musically after it.”

James concluded his talk with a performance which can be viewed below: 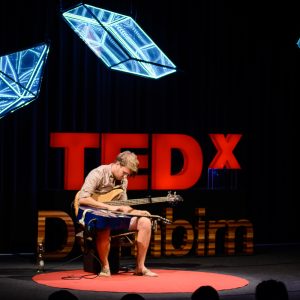 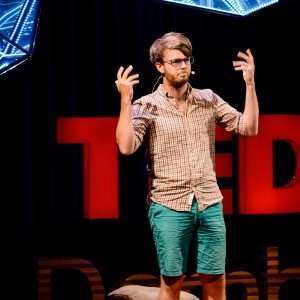 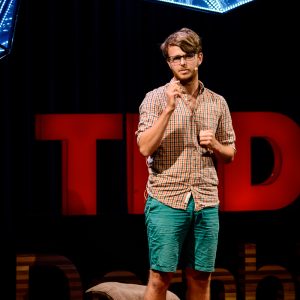