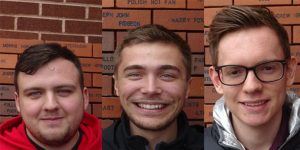 Jack Wilson is a lifelong Harriers fan and joined the club in August 2017 following his departure from university, “I was keen to do something that I was so interested in at school which is Business Studies,” said Jack. “Leaving university to work on this apprenticeship was definitely the right thing to do.”

Lewis Brown is a fellow Business Administration apprentice and he and Jack work closely alongside each other in a variety of roles including operating the clubs online shop, updating stock and orders of merchandise for the shop and engaging with the clubs various sponsors.

What drew me into the role was the opportunity to explore different avenues,” said Lewis. “I’m learning a lot of skills from this one role. “The club were passionate to have us Jack and I in and push us as far as possible, and help us gain new experiences.” Social Media and Digital Marketing apprentice Luke Thompson was appointed in August 2017, and has responsibilities including video editing; article writing and providing live social media updates on match days.

“I’ve settled in well and have really enjoyed being at Aggborough on a daily basis,” said Luke.
“Being a Harriers fan it has been interesting to see the club from a different angle and see all the hard work that goes on behind the scenes. I’ve learned a lot in the short time that I’ve been here so far.”